back in NC on lazy sunday afternoons after crazy weekends, my friends (who i miss… a lot) and i used to order indian food from royal india and watch bollywood movies. i miss fob sundays 🙂 we had a bollywood sunday this past weekend, and ordered in CTM, which made me want to make it this week!

CTM = chicken tikka masala. as told to me by my bff AK, CTM is actually a british dish that was originally created with a can of campbell’s tomato soup. wow, i abbreviate a lot.

wherever it came from, its delicious. i love my mom’s recipe, so i use hers and tweaked it a bit. i made this last night for a few friends who recently started rotations for med school and of course, KP.

lots and lots of pics!

is it just me, or do kids in med school not eat properly? one of my friends on surgery rotations eats like a bagel for dinner. IF he even eats dinner. listen – if you have time to go to the deli, place an order and eat a bagel, you have time to eat a meal. just call me, i’ll make you a sammich. we can’t have our future doctors malnourished.

so to start off CTM, you need to marinate the chicken. plop about a cup (i honestly have no idea) of yogurt into a large bowl. put in a HEFTY amount of tandoori masala and a big pinch of salt.

mix until you get a reddish color. mine was too light, but whatever. 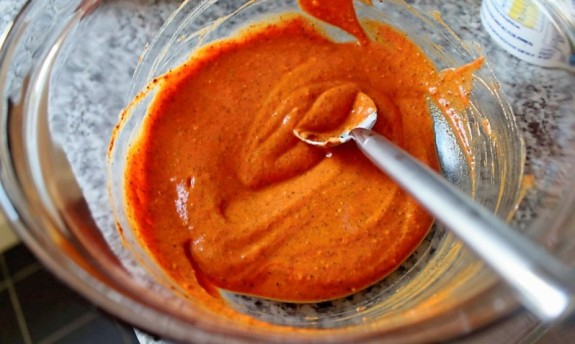 slide in about 1 lb. chicken breast, cut into chunks.

when has raw chicken ever looked so good? i love this camera!

toss, coating every piece of chicken with marinade.

cover and refrigerate as long as you can… up to overnight. 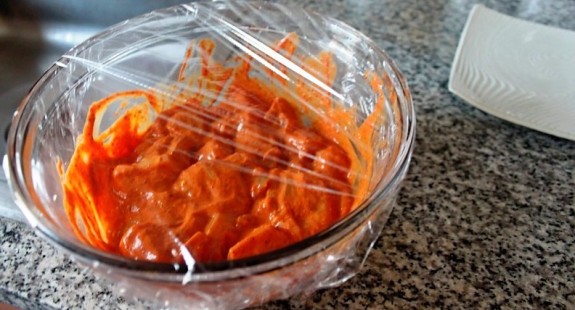 then… make a snack, watch some tv, chill while ur chicken chills. heh.

then get started on the curry.

chop up 1 small/medium onion, about 3 (or more) large garlic cloves, and grate some ginger or use ginger paste.

heat some oil (i use olive) over medium, medium-high heat in a large pot or pan.

once the oil is hot, add a few bay leaves, a cinnamon stick and some cloves. i didn’t have any cloves and of course, the spice store closes at 6pm so i can’t ever get any. so i used extra garam masala later to make up for it.

once the cloves pop, or in my case whenever i felt like it, add the chopped onion, garlic and ginger.

fry until the onions are just starting to caramelize and everything is fragrant.

then add a little less than half of a 28 oz. can of crushed tomatoes and a bunch of spices.

let it cook until the oil begins to separate a little.

add chicken and its marinade.

stir, stir in some heavy cream until the color turns dark pink. simmer and let the chicken cook through.

taste test, adjust, and serve with rice and/or naan 🙂

actual recipe will be posted in a bit.