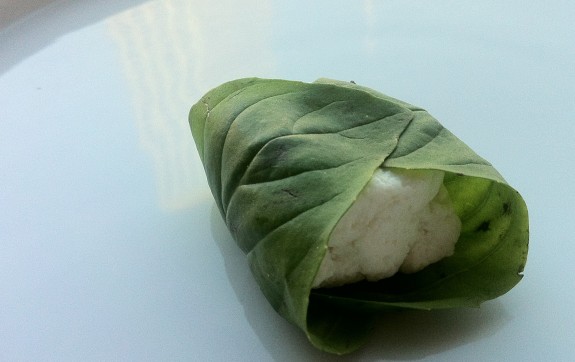 “On the table, under a wooden bowl to protect it from hungry rats and cats alike, sits a perfect little goat cheese wrapped in basil leaves. Prim’s gift to me on reaping day.”

cheesemaking is actually REALLY simple. invest in a candy thermometer, some cheesecloth, and you’re good to go! it won’t taste exactly like the stuff you buy in the store, but that’s because its homemade and fresh. mine came out to a thick ricotta consistency. if you let it drain longer it should turn into the drier, more crumbly consistency that we are used to seeing. i like the creamier consistency, but i’m also just impatient.

so they say you should use pasteurized goat’s milk, NOT ultra-pasteurized. i went to 5, FIVE, stores looking for regular pasteurized goat’s milk. I finally found it at the sixth store – an amish market – but they only had a small bottle of it. a cup. so whatever i just got it and tried it with the cup to see how it came out before i buy more to make a larger batch. FYI – the final amount of cheese made is about 1/4 of the amount of milk used.

one day i’m going to break some rules and try to make it with ultra-pasteurized goat’s milk to see what happens, since it’s a lot easier to find. will update you all!

on to the cheesemaking! heat the milk in a pot fitted with a candy thermometer until it gets to 180 degrees. 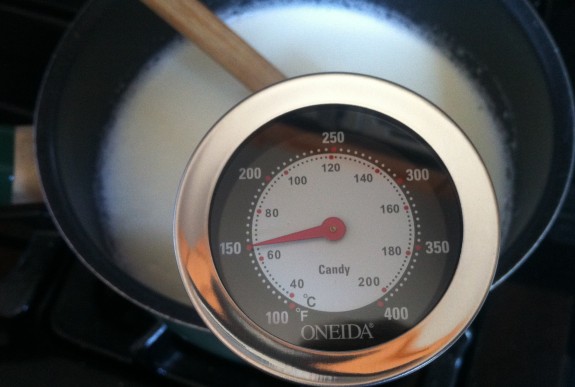 i kept stirring so that the milk wouldn’t scorch on the bottom of the pot… but stirring brings down the temperature so take that into account.

when the milk hits 180: take off the heat, stir in the lemon juice and let sit for about 15-20 minutes. curds will form on the bottom. stir every once in a while if you’d like… i stirred a lot and the curds came out really small, i’m not sure if that’s normal.

line a mesh strainer (twice) with cheesecloth, leaving extra dangling over so that you can tie it up later. strain the curds over the sink and let sit over a large bowl for a bit.

then make a bundle, squeeze out some liquid (carefully! you don’t want to lose any of the curds through the cheesecloth) and then tie onto something that will let it hang and drain for 1-1 1/2 hours. 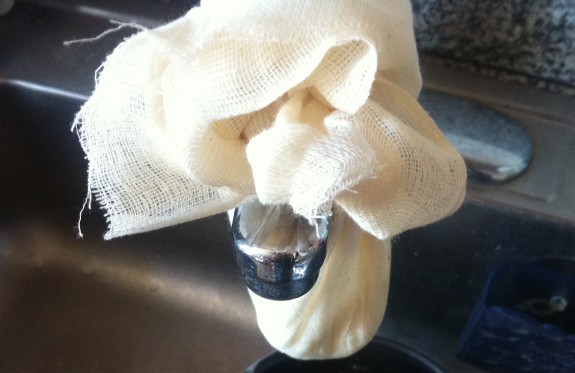 put in a bowl and mix with some salt, fresh grated garlic, minced herbs, whatever you want to flavor it with. i just added some cracked sea salt and a touch of olive oil.