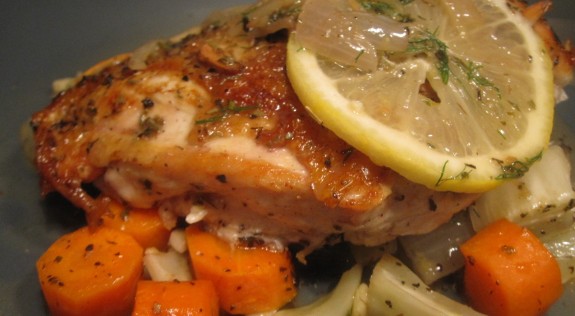 if you know who sings that song, i’ll make you dinner. 🙂

anyways – sorry for the lack of posts! i was really sick last week and all i ate was oatmeal and soup. not fun to blog about.

since my tastebuds are destroyed from all the meds, i really havent been craving anything. but sunday was superbowl, which means i ate junk, so i wanted something healthy. i was going to make something cajun in honor of the saints, but 24 was on so i had to make something quick.

i decided to roast a big chicken breast for my friend and i. i was actually very surprised with the results, because ive never gotten the skin this crispy before! it was exciting. and honestly, a bit hard to believe!

i’ll share my tips for success 🙂 its super simple but very flavorful. i roasted the chicken atop some veggies and made a quick lemon pan sauce to go over it all. mmm.

i dont really have exact measurements for anything since i just kinda of winged it, but next time i promise to get a recipe down for you. i’ll try my best to approximate what i used.

start off by prepping your veggies. i used half of a large, sweet yellow onion, 2 carrots and a whole fennel bulb. throw these into a casserole dish large enough to fit the chicken breast.

with the help of my friend (i’ll forever get queasy with raw meat) we cleaned and trimmed up the breast. he removed these 3 random pieces that looked like tenders from under the breast which kept it nice and even. and it gave us some testing bits.

keeping the skin intact, salt and pepper the chicken on both sides. if you are using coarse sea or kosher salt and coarse pepper, press the seasonings into the flesh and skin a little. (ew. ) heat a large pan (not nonstick) with oil over medium to medium-high heat. you only need a thin coat of oil on the pan.

once the oil and pan are hot, place the entire chicken breast skin side down on the pan. 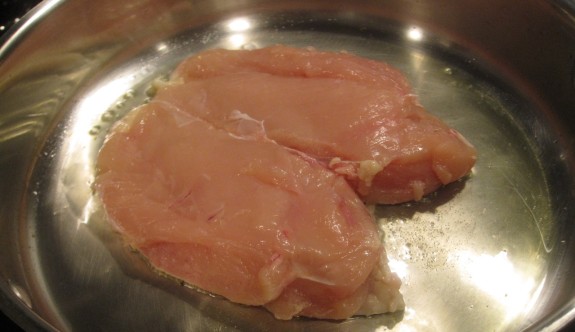 i know, it's not appetizing

it will sizzle. let it sit, undisturbed, for about 5-6 minutes or until the bottom is browned.

while the skin is browning, quickly season and toss up the veggies aka bed for the chicken. just pour 2 quick glugs, i would say about 2 tablespoons maybe, of olive oil onto the veggies. then add a couple of roughly chopped garlic cloves and salt and pepper. also add some fresh lemon zest and dried herbs – i used oregano, basil, thyme and marjoram. you can just use herbs de provence if you have it. toss it together and toss in a couple of lemon wedges.

after everything has a nice coating of the olive oil and herbs, seasonings and aromatics, tuck the lemons into corners. i also added 2 lemon slices to go right underneath the chicken breast (not pictured, it was a last minute decision)

when the skin has browned a bit, flip and let cook on the other side for about a minute or 2. then, using tongs (maybe 2 pairs depending on how big it is and how strong your grip is) move the chicken to the casserole dish – skin side up.

move the pan off the heat and don’t clean it out.

i threw those extra tenders in the dish too. no need to sear those.

salt and pepper the tenders if you haven’t already. put some sliced garlic on top of the browned chicken (optional) and brush all of the chicken pieces (tenders and browned breast) with melted butter so that they are all moist. then, since the melted butter acts as an adhesive, sprinkle the same dried herbs on the chicken – oregano, basil, thyme and marjoram. i used more oregano, less marjoram and the same amount of basil and thyme.

oh those stragglers. ruining my pic

slide the entire thing into a 400 degree oven until done – i THINK about 30-35 min. could be wrong tho. test the straggler pieces and when they’re done, wait 5 min and test the thickest part of the breast.

meanwhile, make the quick pan sauce 🙂 i waited until the chicken was halfway done to make it.

couldn't let this go to waste!

slice up half a large shallot and wash and chop up some of the fennel fronds.

youll also need a bit of butter, some lemon and lemon zest, chicken stock/broth, a touch of cream, s&p and those herbs. 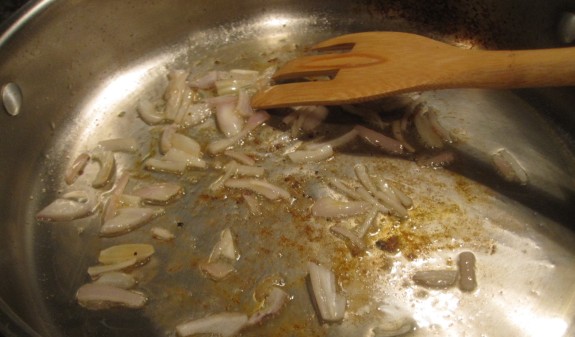 pan sauces help you do the dishes 🙂

there should still be some oil in the pan. if not, add a little bit. heat the pan back up and then throw in the shallot. cook through.

pour in some chicken stock, season with s&p and a little bit of the herbs. lets simmer for a bit, then toss in the butter. 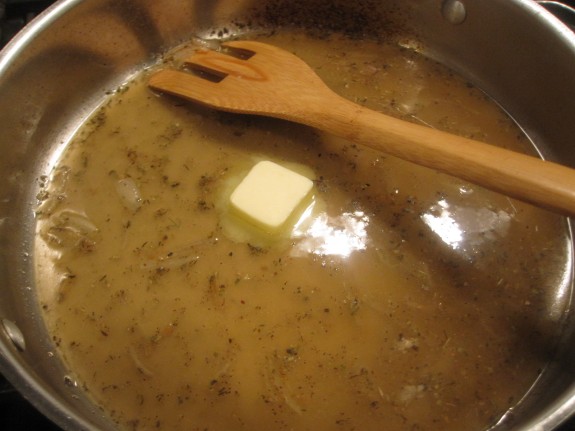 not supp to be KFC, but thats ok.

yummers! the veggies weren’t cooked enough for me and too much liquid was in the pan with them. so i took out the chicken, raised the oven temp to 425 and popped the veggies back in the oven to finish while i finished my sauce.

stir in the fronds and a touch of cream, and throw in 2 lemon slices. 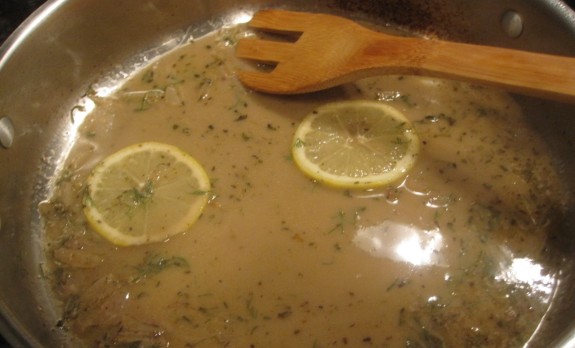 its looking at you.

let it heat through. taste and adjust seasonings if needed.

plate as desired and serve 🙂 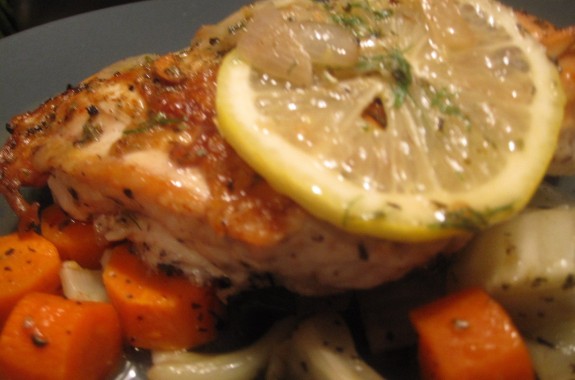 the skin was crispy and flavorful and the chicken was moist and juicy… mmm. it might be a weekly staple from now on!

i ate mine in a bowl bc i loooved the sauce and pan juices. i just let all soak together. its not pretty, but it was so good.