you down with CPP? yeah you know me! (chicken pot pie) 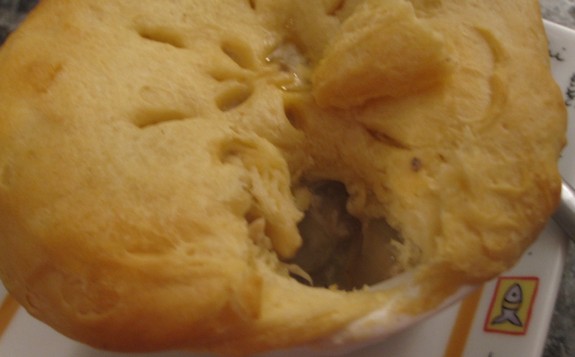 just take a bite... let me shake up your world

i was feeling sick the other day. instead of cracking open a can of soup or ordering in some chinese hot and sour, i decided to stick to my cooking vow and made chicken pot pies 🙂 so proud!

this version was easy. because as i said, i wasn’t feeling well. i was NOT going to make pie crust from scratch, or roast a chicken. i was, however, planning on quickly baking off a chicken breast, but whole foods doesn’t seem to sell single chicken breasts. or even 2. they only had 4 packs! so i was tempted by the deli department which had nice rotisserie chickens waiting for me.

while this recipe is not completely homemade, i wouldn’t say this is a meal to make in 30 minutes either. but it sure is delicious 🙂

ps. i JUST remembered what i forgot to include. PEAS!

first thing, shred the chicken from the bones. i sweet talked the deli guy to give me a half chicken instead of a whole. my helper for the evening did the animal work for me.

i’m really bad at this because i never would get all the meat off the bones.use a fork or 2 to do this, its a little barbaric to use your hands.

if you want to roast your own, i would get a bone-in chicken breast. quick steps on what to do to roast it yourself: smear it all over with olive oil or butter, your choice, salt and pepper. put it skin down in a hot pan, waiting until it gets nice and browned on the bottom. then put it in a baking dish, skin side up, in a 400 degree oven until done. then shred 🙂 either way, you should end up with a bowlful of chicken.

cause just one night couldn't be so wrong!

while he shreded up the chicken meat, i proceeded on to clean and chop the veggies. one thing that i hate to do is clean mushrooms. ever since i heard somewhere that washing mushrooms can cause them to absorb a little bit of water, i only wipe them down. even though, im pretty sure alton brown says its ok to wash them. but the damage is done! i fear soggy mushrooms.

why are u guys so dirty?

i used 1 of those bigger cartons of creminis. i also cleaned and chopped 2 small white potatoes (the kind that you dont have to peel), peeled and chopped a carrot, chopped an onion, and a few cloves of garlic. this part is all really up to your own preference. i’m not a fan of cooked celery (unless it’s in chinese takeout), nor am i a fan of any frozen vegetable besides peas and corn. so i picked my veggies accordingly 🙂 also, this is CPP! rustic is gooood. don’t stress over perfect cubes.

if i was a piece of garlic... this is what i would see.

after i chopped up all the veggies and the chicken was all shredded, i put a small saucepan over low/medium-low heat. put in 2 cups of chicken stock, the chicken bones (sorry veggies, i know it’s kinda gross) along with some thyme and a bay leaf. this is to help boost the flavor of the stock… since i didn’t make my own 🙂 i just let that simmer until i needed it. a couple minutes before i needed the liquids i added a cup of milk.

i had a picture of the infusing broth, but chicken bones aren’t pretty.

so to make the gravy for the chicken and veggies, i decided to make the roux right on top of the vegetables. i haven’t ever done this before, but seen rachel ray make a roux in the same pot as other stuff and i’ve seen food blogger’s recipes that build the roux on veggies for soups and stews and such. so hey, why can’t i try?

if you know me, you know that sometimes i tend to panic easily. and my roomie got to experience it while i made the gravy/stew for the pot pies.

first, i wanted to brown the mushrooms julia child style. so in my large skillet, i melted a knob of butter and poured in some EVOO over medium heat. the oil and butter should ripple a little. carefully – throw in your creminis.

shake it a baby now

shake the pan a bit, just to toss them a little in the butter and oil. now, leave them ALONE. let them sit for a little, then shake the pan again. now this sounds weird, but you know you’re doing it right when the mushrooms make a squeaky noise when you shake the pan. or maybe it was just my mushrooms. oh yeah, and don’t crowd the mushrooms! they need room 🙂 below is showing a little bit of browning- 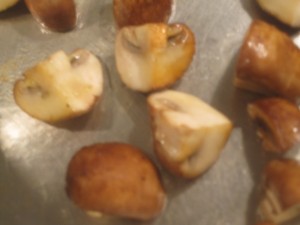 once you get a little browning, it should happen fast. wait, shake until the mushrooms are browned to your liking. 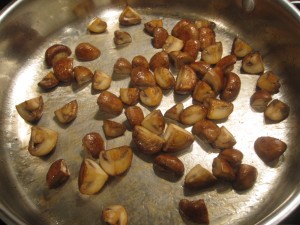 see the brown on the pan? thats the beginning of my panic.

then, toss in the rest of your veggies.

salt and pepper at THIS point, and not on the mushrooms alone. otherwise the mushrooms will release water, and that means no browned mushrooms 😦 i put kosher salt, pepper and dried thyme. sauté.

this started happening, and thus began my minor freakout. 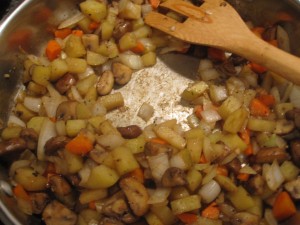 i was worried bc the liquids didnt look NEARLY enough to deglaze the entire pan and engulf all the veggies plus chicken! and i was getting brown bits all over the place! so i was sautéing and scraping and hoping something would work out. i actually put a little bit of chicken broth in there too and a bit more oil to help things move along, no luck.

then i figured screw it, and went on to build the gravy. threw in a good 3 tablespoons of butter to get all the veggies nice and glossy. do this when the potatoes are soft on the outside, not quite done but almost there. if you like your vegetables soft, wait until they are closer to being done. the veggies will cook a bit more in the gravy and in the oven, so keep that in mind.

then sprinkle your 3 tablespoons of flour over it.

keep tossing and allow the flour to coat the veggies. the flour will coat the pan as well. there will be a layer of flour and brown bits on the pan. (this was the height of my freakout) just keep scraping and tossing and sautéing until you think the raw flavor is cooked out.

forgot about this didn't ya

strain in the hot (not boiling!) stock and milk, continuously stirring and scraping the bottom of the pan. 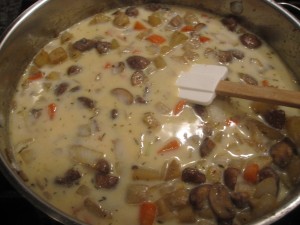 surprisingly! it will be enough liquid to deglaze the entire pan 🙂 phew! keep on stirring and scraping until it thickens. taste and season additionally if needed.

this is the point where you should toss in some frozen peas. then also toss in your chicken.

im down with CPP 🙂

and ta-da! your filling is complete! 🙂 you can either serve this as is with some biscuits, or you can make a big pot pie or small ones. i made 2 pot pies and served the rest as chicken and biscuits.

i took a major shortcut for this 🙂 just bought refrigerated biscuits.  filled my ramekins with the filling –

thanks mom for sending my ramekins over just in time!

took out 2 biscuits, stretched them out to fit over the tops of the ramekins, and tried to make them look pretty. i was hungry and unsuccessful 🙂 be sure to make vents, or even better, a hole for steam to escape.

sorry my camera died for a bit, phone pic 🙂

bake at 350 until the tops are baked through. 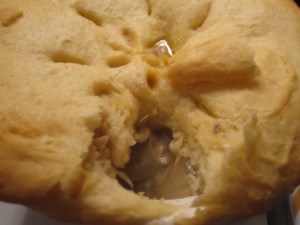 i wish you had smellovision!

a tad over 1 cup whole milk